The Dream of the Hydrogen Economy 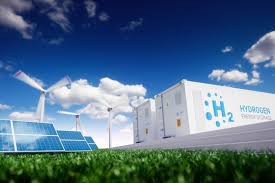 October 2020
Will the efforts of politicians finally push start on the hydrogen economy, or will it remain a far-off dream?

The European Union and the German government have both recently released their hydrogen strategies, which many see as the ‘silver bullet’ in the fight against climate change. Proponents argue that there is lots of hydrogen out there, and if you use a fuel cell, electricity, which is the most useful form of energy we know, can be created in a very clean manner. That all said, we have been talking about the hydrogen economy for up to fifty years, and we have still not seen any mass usage of hydrogen and fuel cells except in niche market applications. This begs the question of whether the efforts of politicians in Brussels and Berlin, as well as the constellation of interested parties lobbying them, will finally push start the hydrogen economy, or will it remain a far-off dream?

Until recently, the main discussion has been about whether it makes sense to go ‘all-electric’ or to use ‘hydrogen’ as the storage mechanism and bridge between our present fossil fuel-based economy and a future renewable one. The major proponents of the hydrogen future are the oil & gas and chemical companies, which of course, makes sense, as the use of hydrogen would enable them to use much of their existing gas infrastructure, which, in a fully electric world, would be a thing of the past. Interestingly, a considerable amount of support to the hydrogen economy comes from NGOs and utilities. However, the latter should not be a surprise as a ‘green’ hydrogen-based economy, using renewables to create the hydrogen and a fuel cell to convert it back to electricity, would need a massive increase in new clean power generation capacity.

One other interesting question is where this massive amount of hydrogen should come from in case you want to use it extensively in sectors such as transport, heating & cooling and heavy industry. The renewable lobby groups have advocated that all the hydrogen should be produced in Europe using renewable energies such as wind and solar. The sceptics have argued that Europe does not have the resources or the public acceptance, particularly around wind, to expand renewable installations and are arguing that an import approach, say from Northern Africa, makes more sense. This approach is supported in turn by some parts of industry in the hope of getting cheaper hydrogen while others are afraid of competitors who will locate close to where low-cost hydrogen is produced.

Further complicating the matter is the fact that there are multiple ways to create hydrogen. The most common method uses a heavily carbon-intensive process that converts natural gas into hydrogen and CO2 under a high-temperature heat process. This so-called grey hydrogen already accounts for circa 1% of global greenhouse gas emissions and is no solution going forward. There are three greener alternatives:

The first possibility is green hydrogen, which uses cleanly produced electricity and an electrolyser to separate hydrogen from water. This is at present an expensive solution and has not been done on any large scale to date, but there is innovation taking place here and there are economies of scale possibilities. ‘Green’ hydrogen is supported by some renewable and gas companies and opposed by other gas companies which prefer other hydrogen alternatives. The EU commission and the German government stressed that this is their favoured form of hydrogen production.

The next possibility is blue hydrogen, which uses the traditional steam reforming process with the resulting CO2 separated and stored in say an old gas well. The issue here is that nobody has ever stored CO2 on such a large scale. In addition, the costs of doing so currently seem very high, and we certainly would not like to be the ones ensuring the risks of whether the CO2 will stay in the ground or not! As a result, it is opposed by NGOs and some renewable energy companies and related associations.

The heavy lobbying of the gas industry has led to a very interesting result. The EU Commission and part of the German Government see that blue hydrogen is needed in a transition phase. This is remarkable conclusion given that the appropriate infrastructure and logistics for the transport and disposal of CO2 are yet to be build and will take many years! One can only conclude that it looks like a long term strategy of the gas industry.

The final possibility and a possible game changer for the gas industry is turquoise hydrogen, which uses an innovative pyrolysis process to create hydrogen from natural gas with the only residue being a solid form of carbon. This is very interesting as the resulting carbon could be used in steelmaking, batteries, and for new innovative materials such as graphene or indeed, if needed, be buried in the ground the way coal was millions of years ago. Nevertheless, this is very early-stage, and nobody knows if it takes years or decades to scale up and bring costs down.

What this leaves us with is a highly complicated set of paths forward, not to mention the possibility of substantial technology improvements in other areas such as batteries or power generation technologies such as offshore wind which would make the need for hydrogen defunct. That all said the next years are going to be very exciting in European energy!