Why electricity is the new oil 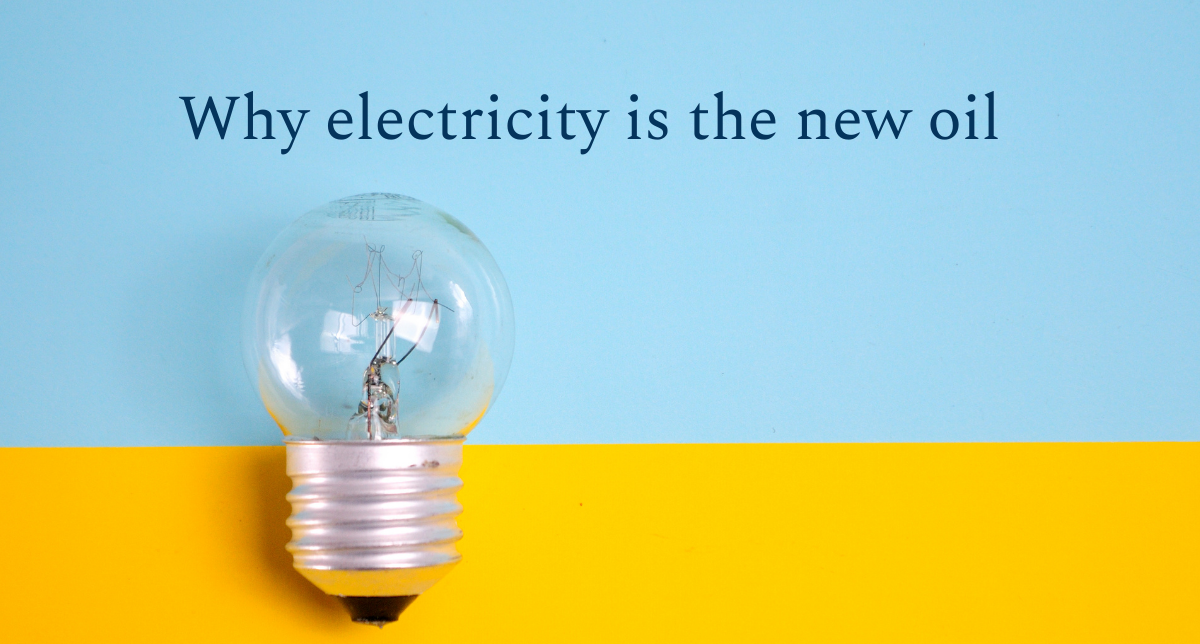 For the last 100 years, one energy source has dominated global headlines: oil. Not only has it been the most traded commodity, but countries have also gone to war over it, regimes have fallen because of it and massive wealth was created in the process. The whole transport revolution in the 20th century, be it road or air or sea, would not have been possible without it. Then there is the mass of chemicals and plastics which are dependent on it. That said, we are now in a new century, one that will belong to electricity, not oil. Let me explain why.

The rise of electricity over the last 150 years has given people an incredibly flexible and easy-to-use form of energy. Electricity is used in the home and the workplace for lighting and heating as well as providing power for a whole range of appliances, machines and digital devices which are all part of modern life.

Over the last 25 years, we have computerised and “software-ised” our world to the point where society has become reliant on IT but even more reliant on electricity. Global logistics, telecommunications, finance let alone social media and the internet cannot function without electricity.

All digital devices, be they an iPhone or a Google server, require electricity. Looking ahead, we will integrate artificial intelligence, quantum computing, robots and sensors increasingly into our lives. These technologies will help improve our health, with robots, in particular, enabling autonomous driving and a whole host of functions that we cannot even imagine. None of these devices require oil but they do all need electricity.

The electrification of transport is gathering momentum across the world as new players such as Tesla and BYD as well as incumbents such as VW rush to bring a new generation of exciting electric vehicles (EVs) to the world.

EVs are fun to drive and are cheaper to run than cars powered by an internal combustion engine (ICE). We are only a few years away from price parity between the two.

Currently, around 25% of global oil demand – about 15 million barrels per day – goes directly into fuelling automobiles. While it will take many years for EVs to replace the existing fleet of ICEs, its inevitability will have a significant impact on global demand for oil.

The burning of fossil fuels such as oil is influencing climate as well as air quality. Regulations across the world are pushing the automobile industry to reduce emissions, and the cheapest way to do this is to increase the efficiency of the engine by electrification - be that partially through a mild-hybrid engine or a plugin or replacing the ICE with an electric drive.

The biggest issue with ICE remains that even after 100 years of development, it is still challenging to improve efficiencies and thus reduce fuel consumption. As it currently stands, the average ICE engine has 30% efficiency, meaning the other 70% is not used to move the wheels of the car and is instead lost through friction and other forms of heat loss.

With an electric engine, efficiencies are above 90%. In practical terms, what this means is that an EV needs one-third of the energy input of an internal combustion engine, making it good both for your pocket and for the environment. While oil is mainly a fuel, it is also used for producing plastics and a whole range of valuable materials used in clothing (nylon), road making (asphalt), furniture (linoleum) as well as chemicals (fertiliser). With increasing populations across the globe, it looks very short-sighted to burn away this incredibly important molecule.

My final point is on China; the country’s thirst for energy has fuelled its incredible economic development over the last two decades, but it has come at a hidden cost: a growing dependence on energy imports and in particular on oil.

The Chinese strategy for dealing with this risk is simple: electrify everything and clean up the power system. Since 2000, China has added enough power generation capacity to meet the combined electricity needs of Japan, India and Germany.

In recent years, the build-out of renewables has been nothing short of remarkable. Last year, China installed over 60GW of renewables, roughly one-third of all global installations. Besides, China has made itself the world leader in the production of solar panels, EVs and batteries and the materials of their supply chains.

China’s energy strategy is multi-pronged: it is about bringing wealth and prosperity to the Chinese people, improving the environment, and capturing a global competitive advantage in critical future industries, such as energy and transport. But mostly, it is a conscious strategy against the growing dependence of its economy on energy exporters such as Russia, OPEC and the United States.

A side benefit is it will help the world to decarbonise faster than would have otherwise been possible. All this helps to achieve China’s final strategic aim: to be seen as a global saviour in a world where oil is no longer relevant.